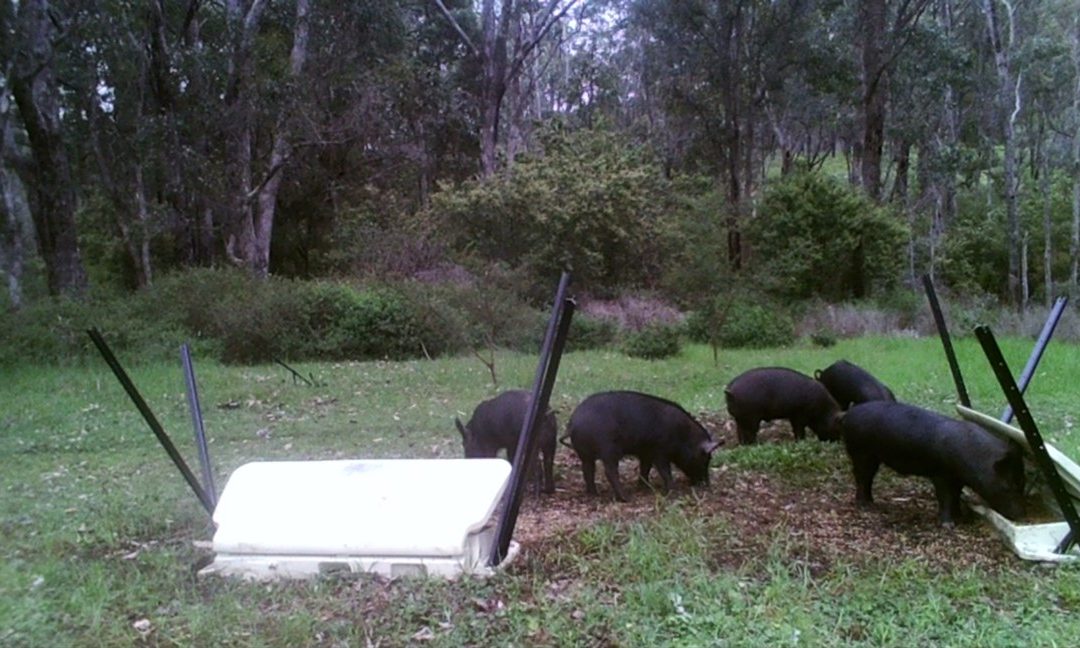 Feral Pigs are a cause of serious agricultural and environmental damage within the Leschenault Biosecurity Group (LBG) operational area.
After consultation with the community, Feral Pigs were identified as a priority species as a focus for project funding. Feral Pigs have a considerable impact on the environments in which they become established, causing damage to both animal and plant biodiversity.  Perhaps the most obvious damage caused by feral pigs is when they turn over soil, logs and rocks while searching for roots of edible plants and invertebrates.  Disturbance caused by this activity can promote weed establishment, alter vegetation structure and contributes to soil erosion and contamination of waterways. There is also evidence that pigs spread Phytophthora (dieback). Pigs are also susceptible to several significant exotic diseases of livestock not yet present in Australia. It is important to manage feral pigs to prevent build-up of large numbers.

LBG and Landowners Working Together for Successful Trials of New HOGGONE® Feral Pig Management System
LBG has had much success with trial use of HOGGONE® meSN® Feral Pig Bait and the HOGGONE® Bait Box proving to be an effective and humane system for feral pig management.  This system involves  a specific type of bait, placed within boxes carefully designed to allow pigs to smell and easily access bait after limited pre-training, while keeping other animals, rain and extreme heat away from the bait placed in the boxes.  The boxes are designed to allow feral pigs access to bait while limiting non-target species access. The LBG conducted our  first trial of this system on private property in Mumballup, within the Shire of Donnybrook-Balingup WA working collaboratively with two property owners.  Based on the success of this first trial, the group has now successfully trialed this system at multiple properties.

Why trial HOGGONE?
HOGGONE® meSN® Sodium Nitrite baits are considered a humane form of control. The bait is an approved food preservative in low doses and eliminates pigs quickly as they lack an enzyme present in other fauna. The pigs expire within 1-3 hours of ingestion. The carcasses of affected pigs pose no threat to scavenging fauna and the bait is presented in target specific boxes that prevent other fauna from accessing the bait. For more information on the HOGGONE system please visit:  animalcontrol.com.au/products/hoggone

The LBG  have found this be a very effective, fast acting and humane feral pig management alternative, because:

The entire process typically takes about 2 weeks, with time spent on site each day being minimal and shared between LBG and the landowner. LBG’s cameras are checked every morning, and pre-feed, placebo and ultimately, treated bait for one night, are added in the evening.

A Participating Landowner’s Thoughts on this System
Local landowner, Bob Grieg, who participated in our first trial, late in 2020, has just completed a second successful trial, with LBG at his 100-acre property to address “new” pig activity.  According to Bob, “It’s a battle to manage feral pigs in this area.  We provide the food in the paddock; the forest provides the shelter.  It’s very difficult to have any method that gets all of the pigs on your property in one go; a rare event. The beauty of this system is that once you get them to eat from these boxes, it’s 100% effective for all of them.”   He said that he and the LBG are learning together from each trial.  Per Bob, “it seems to be that if you have enough HOGGONE boxes you can get all of them in one go.”

For more information please contact Leschenault Biosecurity Group at 0477 049 967 or by e-mail at info@lbginc.org.au