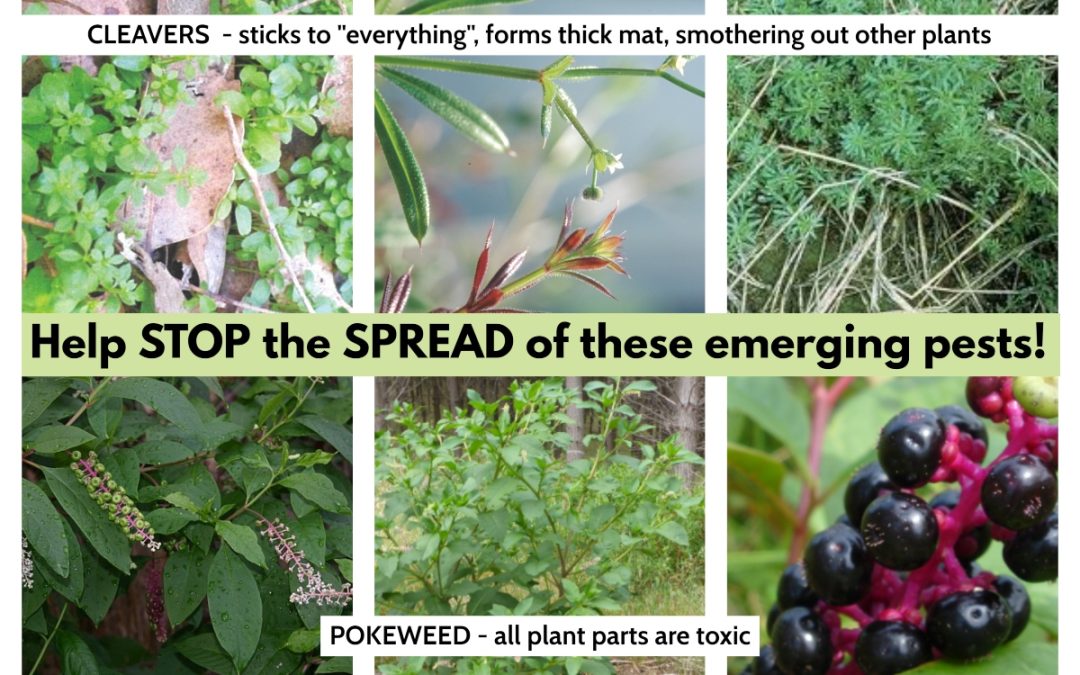 PLEASE LOOKOUT  for CLEAVERS & POKEWEED – Let’s Stop Their Spread in Our Area!
These weeds are emerging threats to our area, with potential for significant damage to the Southwest.
Community members are urged to please be on the lookout for, and report any sightings of the two invasive weeds pictured above, Cleavers and Pokeweed, to help prevent their spread in our area.

What can YOU do? Be on the lookout for these plants and report any sightings, even if you’re unsure. Please take photos and note exact locations.

If you suspect you suspect Pokeweed, please take photos and make a report to DPIRD by using the free MyPestGuide™ Reporter app ( this is the most thorough tool for assisting the department to investigate, confirm, map and control the plant) or contact DPIRD’s Pest and Disease Information Service on 9368 3080 or via email padis@dpird.wa.gov.au

Report sightings of Cleavers directly to LBG at info@lbginc.org.au or ring us on 0477 049 967.  Sightings reported directly to Leschenault Biosecurity Group (LBG) will be verified by the group and followed up with a plan of action to address, to help prevent the spread of these weeds in our area.

POKEWEED (Phytolacca americana) – On the hunt….let’s stop the spread of this invasive and highly toxic weed!  Pokeweed is an environmental weed and can also affect agricultural activities by contaminating produce. DPIRD and local recognised biosecurity groups have vigilantly been on the hunt for Pokeweed, which was first identified in WA in 2018.  It is currently a C1 (Prevention) category and must be eradicated if found. All parts of the Pokeweed plant are highly toxic, and seed is readily spread by birds and machinery if proper biosecurity practices aren’t observed. It is illegal to transport any part of the pokeweed plant, which is a declared weed, and it is recommended that if you suspect you have found a plant or seedlings growing to report directly to DPIRD.

Find out more about Pokeweed at:  south-west-residents-urged-maintain-pokeweed-watch

CLEAVERS (Galium aparine) – is a highly invasive  weed that has potential to infest large areas of the southwest and cause significant environmental and economic damage. It is an annual plant which germinates in autumn, and slowly spreads, ultimately creating a mat on the ground. From there it climbs up “anything” that it can find and smothers out other plants.   Cleavers spreads by its seeds which are dispersed by wind, water, and directly from contact with the plant by people, animals and machinery. The seeds survive in the soil for up to three years.  Cleavers is a priority declared pest weed in the Shire of Bridgetown- Greenbushes.  However, many community members have reported this weed on properties within the Shire of Donnybrook- Balingup.  It is a robust annual sprawling herb with small sticky hooks along its stems, at the tip and along the edges of leaves and even on its fruit, which readily catch on animals, birds, clothing and machinery, prompting common names such as “Velcro weed”, “sticky weed”, and “bedstraw”.

Find out more about Cleavers at: www.agric.wa.gov.au/declared-plants/cleavers-what-you-should-know